Cell theory states that all organisms are made of cells. This is true in most cases but there are some notable exceptions, like skeletal muscle. This topic covers the cell theory, the exceptions to cell theory and how cells differentiate during cell growth. Using microscopes is part of the topic, as is measuring the size of cells.

Learn the biological vocabulary for 1.1 Introduction to cells and test yourself using these flash cards. These diagrams summarise the main sections of topic 1.1.
Test if you can draw something like these concept maps from memory.
Can you ask several questions about the points using command terms, e.g  List,  Describe, Outline, Explain, How to calculate the size of a cell using the scale bar.

This is a tricky structured question which brings together several aspects of the topic 1.1

Explain the origins of multicellular organisms and its biological significance.  [5]

Try to write an answer first then compare your answer with the model answer shown below, and explained in the video.

[Many thanks to Catarina Gouveia, St. Dominic's International School, Portugal, for this question and mark scheme]

Multicellular organisms are organisms made from many cells.

Cells started to divide because growing bigger was not an advantage / it is limited by low SA:VOL ratio.

The evolution of multicellular organisms allowed specialization of cells and tissues.

Specialized tissues can develop by cell differentiation in multicellular organisms.

Differentiation involves the expression of some genes in a cell’s genome and not others.

Large size can allow the organism to reduce their metabolic rate.

Large organisms can be more independent with regards to the environment / they can modify their enviroment.

This question requires knowledge of the functioning of single celled and multicellular organisms.

Write your answer and then compare it with the model answer

Write your answer and then click on the "+" icon for a model answer.

Distinguish between means give an account of the differences putting both comparators in each sentence.

This question requires knowledge of the mechanism of cell differentiation.

Command term hints: Explain means that you must include details of reasons and causes.

Extra exam question on calculating magnification   - - - click the + to open it -- >

You previously looked at a video on cell size.  Now see if you can do a true size calculation.

The size of a mitochondrion on an electron micrograph is 43 mm. 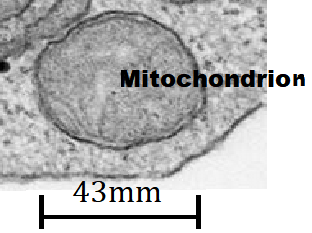 If the magnification of the micrograph is x20000 calculate the true size of the mitochondrion. (2 marks).

Show your calculation, you may gain marks for the method of the calculation even if your answer is incorrect.

Click on the "+" icon to see a model answer of the calculation.

One method divides by the magnification first.

Another option is to convert the mm measurement into µm first. This avoids so many decimals.

This quiz contains a set of multiple choice questions covering the topic.
Explanations of each answer are displayed after you click to check the answer(s).

According to cell theory, living organisms are composed of cells.
Cells come from pre-existing cells and cells are the smallest using of life.

Cell theory covers most, but not all cases.
Which one of these statements is an exception?

Exceptions to cell theory are : multinucleated striated muscle the giant single celled Acetabularia algae.
Also, organisms consisting of only one cell carry out all functions of life in that cell. e.g. Paramecium, Chlorella.

There are seven processes which are said to be possessed by all living things.
This sweet pea plant has grown a tendril around some string, to help support its upward growth. Which of the characteristics of living things is illustrated in this photo?

The fly is responding to the closing trap, and the trap has responded to the presence of the fly.

What is the importance of surface area to volume ratio to cells?

Surface area to volume ratio is important in the limitation of cell size.

If you only ever studied individual nerve cells you would never see these abilities which the brain has.

What is this type of property called?

Multicellular organisms have properties that emerge from the interaction of their cellular components. (Emergent properties) The image shows a range of different cell types in the leaf of a Yucca plant.
How do stem cells form this range of cells?
What is the process called?

Specialised tissues can develop by cell differentiation in multicellular organisms.

Differentiation involves the expression of some genes and not others in a cell.

Stem cells can divide and this help researchers to grow them in the lab.

They can differentiate along different pathways in embryonic development which makes stem cells useful for therapeutic uses (e.g. Stargardt's disease) because they can be grown into many different tissues.

The electron microscope image below shows a scale bar marked with 100µm.

The large 'goblet cell' in the centre is producing mucous which will protect the surface of the epithelium. What is the diameter of the goblet cell?

You can often estimate the size using the scale bar and your thumb?

More accurately, measure the scale bar length in mm, measure the diameter of the cell, in mm
divide cell diameter by scalebar and multiply by 100µm

The image below shows erythrocytes and leucocytes.l. Using the scale bar and the ruler placed on the image, estimate the magnification of the image.
Which answer is the best estimate

Calculate the magnification of an electron microscope image from a scale bar?

Convert the ruler measurement to the same units written on the scale bar, in this case 25mm is 25000µm

then divide the ruler measurement 25000 by the number on the scalebar, 25.

The blood cells below were imaged using an electron microscope.

The magnification is x3000 and the ruler measures the central cell as being 2 cm in diameter. Estimate the actual size of this white blood cell.

If you know someone with a disease that might be cured by stem cell therapy then you might be a supporter of this research. You probably also know that some other people have deep concerns.

Which of the following is not a potential benefit of the use of stem cells?

There are ethical concerns about the use of embryo stem cells.

Many people who are against stem cells say that it is because cells are taken from human embryos, which have the potential for human live, and should be protected. There are other sources of stem cells, they argue.

Which phrases most accurately describe a multicellular organism?

Comment: The multicellular condition allows for differentiation into cells of different types and also replacement of cells when injured or damaged.

Which two processes are involved in cell differentiation?

Comment: During differentiation genes may be activated or repressed causing the formation of different proteins by the ribosomes but other organelles such as mitochondria continue to function in the same way

Which is the best definition of a tissue?

Comment:Tissues may have one or several cell types and one or more functions

Which of the following could be used to distinguish a living from a non-living object?

Comment: Inanimate objects can move, produce and utilise energy but the process of respiration is exclusive to living systems

Human red blood cells are circular and 0.6 μm in diameter. A photograph of a red blood cell is shown as an illustration in a book with a diameter of 1.2mm. What is the magnification of the diagram?

Comment: Convert 1.2 mm into μm by multiplying x 1000 = 1200 μm (so that both units are the same). Then you can see that 0.6 x 2000 = 1200. Or use the formula Magnification = Image size/true size. If the photograph is larger than the cell, the magnification could not be 0.5x which would make it smaller. Eliminate obviously incorrect answers.

Which is the correct order of SI units, beginning with the largest?

Comment: SI units always have a differential of 1000. The unit without the prefix is the standard SI unit (metre, m). B and D are clearly wrong, eliminate those answers first.

The image below is of Dracaena leaf upper epidermis cells.
Which of the following is the best estimate of the length (from top to bottom) of an epidermal cell? 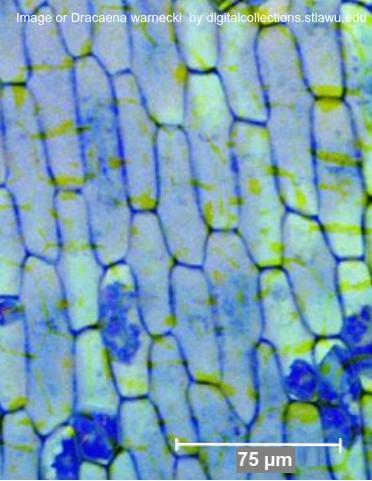 Comment: The cells are approximately the same height as the scale bar length. So 70µm is the best estimate.

If you wished to gain a more precise estimate of the size of the epidermal cells in the photo above, which phrase best describes the reason that you would count several rows and not only one?

Comment: Repeats are used to calculate means when there is variation (in this case, of length). A,B and C could also be considered correct but D is the most valid answer.

Test your construction of biological explanations using the drag and drop questions below.

The multicellular nature of many organisms.

Drag and drop the correct term into the gap to describe differentiation.

In a multicellular organism, there are specialised that develop from cells by . Differentiation involves altering gene , genes that code for needed for cell development are expressed in the cells, hence the cells have varied due to the of protein synthesised.

Drag and drop explanation of the limited size of cells

Cells are limited in size by their efficiency in exchanging through the membrane As the cell's increases, so does its need for materials such as or nutrients. However, the larger the cell, the lower the to volume ratio and the cell becomes in materials with the outside of the cell.

Drag and drop explanation of stem cell therapy and ethics

The ethical use of stem cells.

Drag and drop the correct term into the gap to describe sources, uses and etics of stem cell therapy.

Stem cells are able to by mitosis and into mature cells. This makes them have many uses, such as the treatment of disease. Stem cells can be obtained from and from an adult patients own cells. They can also be obtained from 3 to 5 days sfter fertilisation (usually unused embryos from fertility treatment) but this raises issues as it involves the destruction of a .

You need to know uses, sources and ethical issues of stem cell therapy

If you want to review key terminology and have some fun with your revision try this word shoot game.
It will help you remember the terms through repetition.