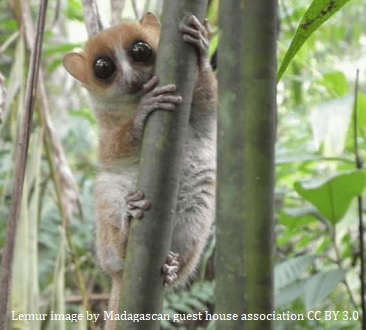 This page gives outline details of the content of Option C for SL & HL. There are revision questions and lists of student skills required.
Helpful for revision. Student can check their understanding and prioritise areas for revision.

A set of flashcards to help revise a few important terms from this option. This section explains the details which students are required to know.

There are understandings, skills and suggestions for revision questions.

C.3 Impact of humans on ecosystems

Community structure is the distribution of organisms within an ecosystem.

Answer the question on a piece of paper, then check your answer against the model answer.

Explain the importance of the following factors in determining community structure.

Examiner hint: Examples are useful to help with your explanation.

Explain the importance of the following factors in determining community structure.

Gersmehl diagrams are representations of ecosystems.

Examiner hint - in a structured answer, use brief sentences.

The diagram below represents a Gersmehl diagram of a temperate forest ecosystem. 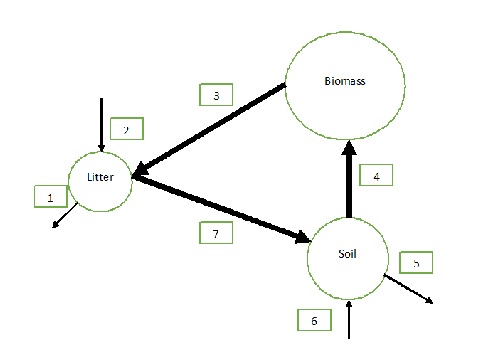 2.Complete the table below to indicate what is represented by each arrow. (2 marks)

3. Predict how the diagram would be different if a desert ecosystem was depicted. (2 marks)

The diagram below represents a Gersmehl diagram of a temperate forest ecosystem.

1. Explain what is shown in a Gersmehl diagram. (2 marks)

2.Complete the table below to indicate what is represented by each arrow. (2 marks)

2 or less correct, no mark

3. Predict how the diagram would be different if a desert ecosystem was depicted. (2 marks)

Examiner hint - refer to the diagram to construct your answer.

Biological control has benefits but also has associated risks.

Examiner hint – the 6-mark question in the Option paper requires detail. Examples are very useful in your response.

Discuss the benefits and drawbacks of the use of alien species in biological control. (6 marks)

Discuss the benefits and drawbacks of the use of alien species in biological control. (6 marks)

Examples should be given credit both as examples if they illustrate a benefit or risk and if they correspond to points in the mark scheme.

Benefit – Cactus moths from South America were introduced in South Africa/Australasia to control populations of Prickly Pear cactus that was outcompeting local species.

(This point would gain two points in the mark scheme, one for the example and one for a benefit of biological control.)

Risk - Approximately 100 Cane toads were introduced to Australia from Hawaii in 1934 to control an insect pest, Corn borer. The population is now over 200 million and is depleting insect populations/out competing local species.

(This point would gain two points in the mark scheme, one for the example and one for the risk of outcompeting local species.)

Relevant examples gain a mark, they can be from your local environment.

There are many methods of conservation of individual species and of ecosystems.

Examiner hint – the 6-mark question in the Option paper requires detail, examples are important in your response.

Discuss the conservation of species and communities. (6 marks)

Discuss the conservation of species and communities. (6 marks)

Any relevant example can gain marks

Example: In situ conservation of the Bengal tiger in India where wildlife sanctuaries have been created to maintain the natural environment suitable for the survival and reproduction of the tiger.

Examples should be given and they need to be sufficiently precise to gain a mark. If the example also illustrates one of the mark points, that will also gain credit.

Evaluating population graphs is an important aspect of this topic

Examiner hint – use the information provided in your response

10 pairs of Ring necked parakeets, (Psittacula kremeri), native to South America, were accidentally released into mainland Greece in 1980 and have become an invasive non-native species. Their diet consists of fruit, nuts, seeds and berries.

The graph shows estimated population size of the parakeets from 1980 to 1998 in a northern suburbs of Athens. 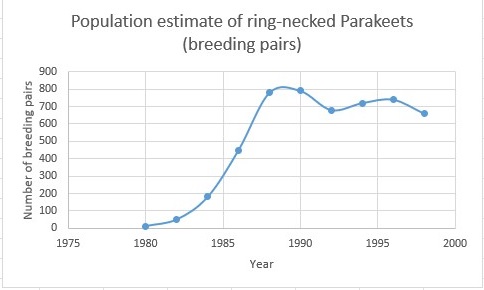 Explain the population growth phases shown on the graph as 1, 2 and 3. (6 marks)

Explain the population growth phases shown on the graph as 1, 2 and 3. (6 marks)

Nitrogen, in the form of nitrate ions, is a major soil nutrient for plants. It is combined with carbohydrate from photosynthesis to form amino acids. Bacteria have a role in increasing nitrate availability in soil but they can also reduce it.

Discuss how bacteria can affect the availability of soil nitrate for use by plants. (6 marks)

Examiner hint: The question concerns the nitrogen cycle but needs to be confined to the role of bacteria and soil nitrate availabilty.

Leaching, fertilisers, lightning are not given credit as the question is only on the role of bacteria.

Test your ability to construct biological explanations using the drag and drop question below.

C1 The picture shows students taking a sample along a line transect. 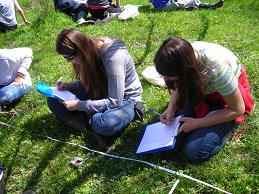 A transect is used in ecological studies to investigate the of a species in relation to an factor such as soil pH.

In order for the data collected along a transect line, the methodology used must be a sample (not subject to bias), (an accurate record of the methodology and sampling method) and positioned along an environmental .

The species the line are recorded and a graphical representation of the species distribution against the edaphic factor can be obtained.

Examiner hint: Ecologicla methods must have random sampling and be repeatable.

C2 Food webs are an important aspect of this topic.

Food webs are a more indication of feeding within a than food chains. This is because many consumers, for example , may feed at different levels in the web and because their feeding habits may change with food , their their age and the of the year. This positions the producers and consumers in food chains in a particular food web.

Animals may change their food sources at different stages in their life.

C3 Biomagnification and bioaccumulation of toxins, pollutants and industrial chemicals are a serious environmental concern.

Biomagnification is the increase in of a toxin at higher levels in a food chain. It occurs when the toxin is (chemically in the environment or the organism), slow to be and not as waste. This causes bioaccumulation in the organisms at one level of the food chain.

Heavy and persistent pesticides enter aquatic ecosystems and are incorporated into and then consumers by achieving biomagnification, increasing concentrations in the levels of food chains. The toxic effects are particularly evident in top as the concentrations are greatest at the level of the food chain.

Biomagnification will occur when a toxic compound is persistent and not excreted.

C4 Richness and evennes are two indicators of biodiversity.

is the variety of living organisms present in a particular area. It has two components:

reciprocal index takes account of both richness and evenness, a value represents a more biodiverse .

It is important to distinguish between richness and evenness. 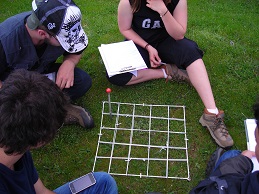 Quadrat sampling a method that can be used to sample plant or non-moving populations in a relatively area.

The chosen area is then delineated by a grid. A pair of coordinates is generated using numbers on a calculator. This avoids human . The quadrat is paced on the part of the grid as decided by the random numbers and the number of each species present in the quadrat is . Sufficient must be taken to ensure a sample.

Quadrat sampling must be repeatable and random.

C6 Phosphorus is a common limiting factor for plant growth and ecosystem abundance.

Phosphorus is a major component in organisms of acids, and plasma phospholipids.

Phosphates are found as rocks. As the phosphate containing rocks are eroded and they go into solution in soil or in aquatic systems. Plants take up these phosphates from the soil, converting them to organic phosphates which are ingested by .

return the phosphates to the soil from the decaying bodies of animals and plants.

Humans the phosphorus cycle by the use of and removal of crop plants leaving less organic phosphate for soil recycling.

The phosphate cycle has no gaseous component and is more easily disrupted by humans than the nitrogen cycle. Phosphates in soil are a vital nutrient for plants.