What should I be doing in IB1 right now?

As we move into March, a lot of the attention in your school will turn to your friends and colleagues in Grade 12 / Year 13 / IB2 / Senior year - they who will be taking their final examinations soon. However, hopefully there are many of you reading this and taking out a subscription to this site who are in year 1 of the course (Grade 11 / Year 12 / IB1 / Junior year). As your compatriots in the year above are preparing for Paper 1 and ensuring that their HL Essay is as good as it can be, what should you be considering right now?

For me, I would start using your The Learner Portfolio to really consider which works and bodies of work have interested you most, and start making connections between them. Don't be distracted by however the texts you've studied have been put together by your teachers in order to help you to understand the concepts and ideas as you've explored them. I, for example, clump together works and bodies of work under very loose thematic headings, mainly to allow a line of inquiry as we study them. The aim of the course, though, is that you develop your own lines of inquiry, make your own connections, and choose for yourselves what texts you want to use for which assessments.

To exemplify this, take a look at my own course plan below: 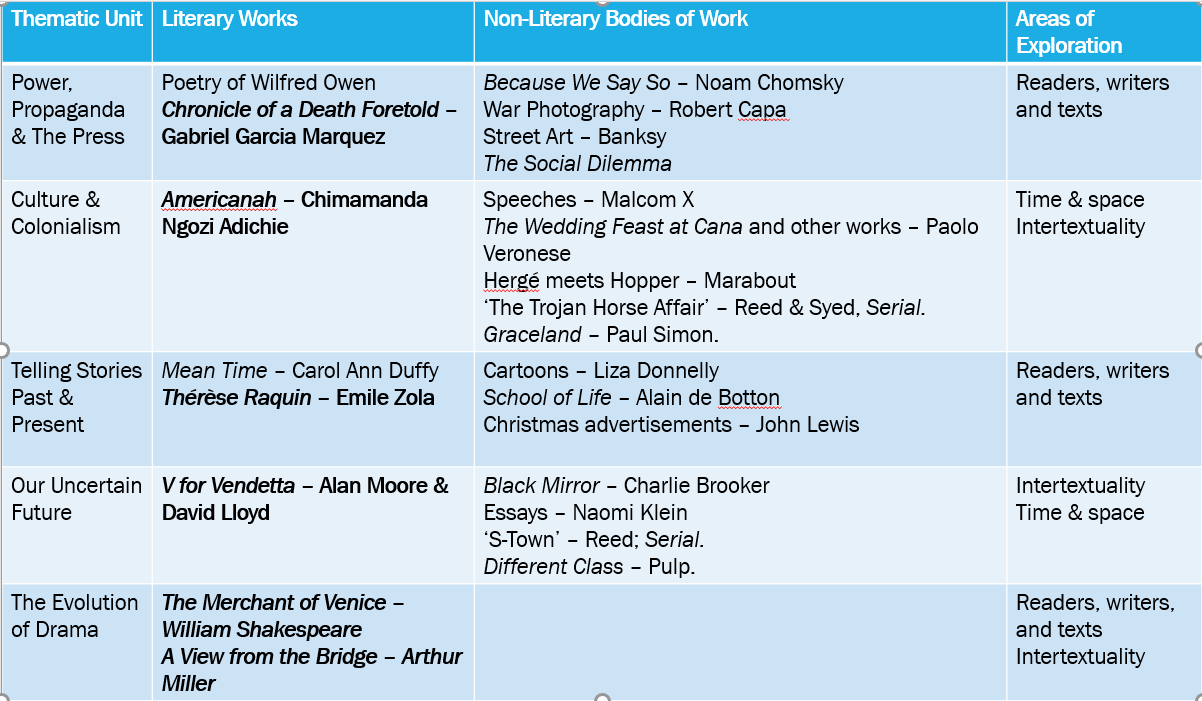 You can see how works and bodies of work have been collected around a common concept or theme ('Our Uncertain Future', for example, with lots of texts about social inequality, post-industrial decline, environmental disaster and other dystopia). This allows for the three different focal points of academic study defined in the Areas of Exploration - more about this in Areas of Exploration section of the site.

However, it is imperative that you don't then think that photographs by Robert Capa can only be paired with Marquez's Chronicle of a Death Foretold. Instead, you might have recognised that the global issue of human nature's willingness to fear the unknown and to demonise minority groups is exacerbated in a world of economic inflation and higher cost of living, and greater competition for jobs amidst saturation of fake news in a social media-swamped world. And this global issue - something that would have to be narrowed and sharply focused to be attainable and successful in the Individual Oral - Commentary or Issue? - is actually more evident in a comparison of Adichie's Americanah and Reed's 'S-Town'.

The same advice applies for the HL Essay, too. If your teacher is anything like me, they will have organised your course in a way designed to make it interesting and to tell a story for you as you explore different works, bodies of work, concepts (A Conceptual Framework) and themes. But this is just one line of inquiry. The goal is for you to identify connections, group texts, works and bodies of work, and choose how and on what you base the major assessment pieces.

Now's the time to tidy up those Learner Portfolios and begin this process, IB1 students*.